TANK SOLUTIONS: An External Perspective on the Work of ITCO Number 2 - February 2020 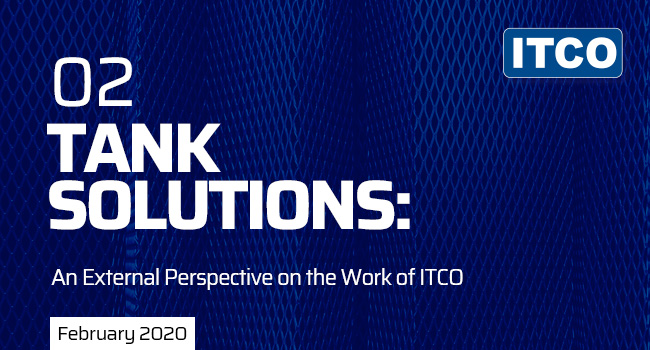 In the second of a series of external perspectives on the work of ITCO, Peter Mackay considers the issue of Working at Height

When I was a young man – about 40 years ago now – I had a job for a while at a motorway service station in the north of England. One of my duties was to receive fuel deliveries, which involved checking that the tanker’s compartments held the volume of fuel that was on the delivery note.

At that time, the only way to do that was to climb up the ladder at the rear of the tanker and walk along the manway, using the dipsticks provided for each compartment. It could be a tricky operation, particularly in bad weather – and trickiest on the one occasion when the driver shouted up to me to “Hold on tight lad!” as he’d got to move the truck forward because his hose wouldn’t reach.

This was around 1980, so only a few years after the Health & Safety at Work Act came into force in the UK. I recall seeing a big poster on the wall of the staff room, with a lot of words on it, but it was not something we were encouraged to read, let alone take into account when assessing the risks of any procedure we as workers were about to undertake.

Our managers at the site had, of course, all grown up in the days before health and safety legislation and thought nothing of getting their hands dirty or climbing over any piece of equipment they needed to, without any protection against what we would now see as obvious hazards.

In the decades since then, much greater focus has been placed on safety in the workplace and it has made a difference: workplace fatalities are much less common than they once were. In the fuel distribution sector, much has been done to avoid the need for tank-top working, at least in the developed world, through the introduction of bottom loading and discharge, better metering equipment and stricter procedures. The only workers who now need to be on top of the tank are those who clean it, and they are – or at least should be – working in a highly controlled environment with proper protection against falling.

But the same cannot be said of tank container operations, where drivers are still regularly being expected to get up on top of the tank to handle loading or discharge operations. As Evert de Jong, Responsible Care Director of the European Chemical Transport Association (ECTA), explained very clearly during ITCO’s members’ meeting in Amsterdam last October, this should not be happening.

For one thing, in the tank container business, the driver may well not have anything to do with the tank itself, being employed by a transport company rather than the tank operator. Should such drivers be expected to be involved in cargo transfer operations at all?

Another important thing to take into account is that tank containers operate around the world, including in some territories where workplace safety standards are lacking or not rigorously enforced.

Any risk-based evaluation clearly indicates that nobody should be working on the top of a tank container. But, if they have to, there needs to be proper protection, with a stable platform on which to work.

Fall-restraint harnesses are sometimes offered as protection but they bring their own risks. I recall seeing a few years ago a harrowing CCTV clip of an incident (in South Korea, if I remember right) when a tanker suddenly over-pressurised while someone was working on top and wearing a harness. The blast knocked him off his feet and he was left dangling helplessly as he was enveloped in a cloud of corrosive vapour. When the vapour cleared, it was apparent that the harness itself was chemically resistant but that the worker wasn’t – there was nothing left in the harness.

So why is this still happening? One answer is that transport companies are not going to turn business down by refusing to service those facilities that have not seen fit to invest in the proper protection equipment. And cargo owners may have little or no influence over what goes on at the point of discharge, especially if that is located in one of the emerging markets that are so important in the development of the tank container business around the world.

ITCO is now looking at updating its guidance on working at height but if this is going to have an impact it will have to spread the word to the industries that tank containers serve – around the world. ITCO is preparing to work with other representative organisations to highlight the issues involved and the responsibilities of all parties in the supply chain, not least those sites where tank containers are loaded and unloaded.

Pending the new ITCO guidelines, ECTA’s best practice document on safe working at height in the chemical supply chain provides some very useful information, including the legislative background that operators might be able to use to remind facilities of their legal obligations, although this is not specific to tank containers.

And drivers themselves are a valuable source of information – it might be worth finding a way to encourage them to report any unsafe practices they come across, especially when they are being required to do something they know is not safe.

This is the second in a monthly series providing an external perspective on the work of ITCO. Members are invited to comment to the ITCO Secretariat (hicks@itco.org) or to the author via email on peter@meredithandco.info. Previous articles are available on the ITCO website.